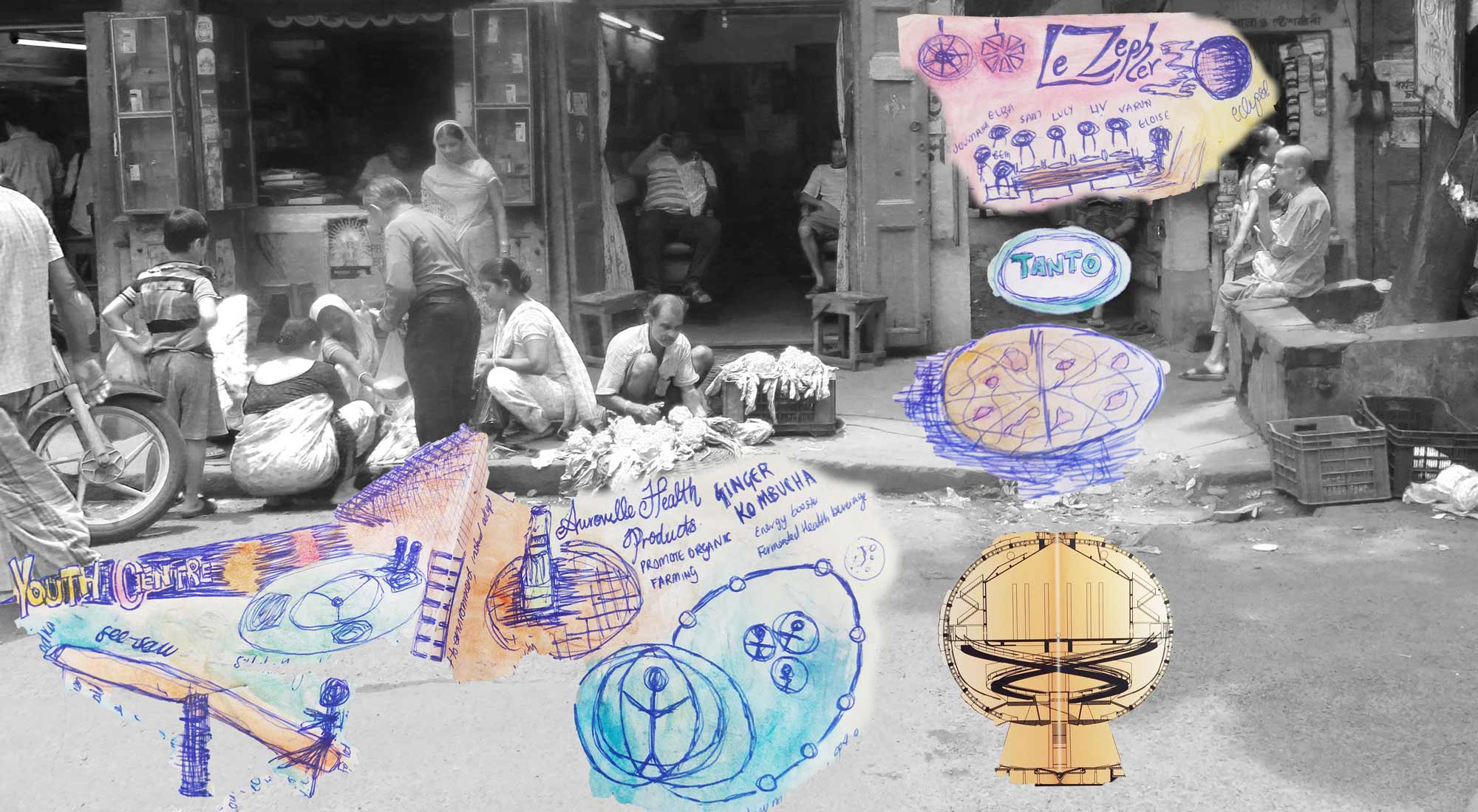 retracing time my last month has been spent on an indian adventure in the experimental township/utopian village/ international city of “Auroville”.  having been bombarded with intrigue since returning, here i’ll share some thoughts from the journey. i may have to drip-feed these over a few posts. for those concerned i was in a cult, i’ll let you decide for yourselves … Is there a word for this? There are words everywhere. I see them, live them. But for this … I have no word. No. Instead I have a thesaurus. A plethora of possible words. But no clarity. I can’t put my finger on one page or definition. What is this I feel? Confused? Confronted? Disturbed? Intrigued? … I am foreign to me. There is turbulence underlying this journey. … Here divinity, the “divine consciousness”, is divorced from religion and the notion of God. This is fascinating given the very definition of divine (adj.) is “of or like God or a god”; with divinity (n.)  “the state of quality of being divine” or “the study of religion, theology”. The term connotes a certain sacredness, an identity, but here these concepts have been taken and reapplied, reconstructed, reformed into a whole new religion of non-religion. … “programme: research through experience of the supreme truth a life divine but no religions” … In Auroville, one must reject religious roots, as this is seen as a source of division. … “Auroville is for those who want to live a life essentially divine. But who renounce all religions whether they be ancient, modern, new or future…” … I wonder though, does removing religion mean freedom? Or does it bind one to the burden of fostering one’s own divinity? . 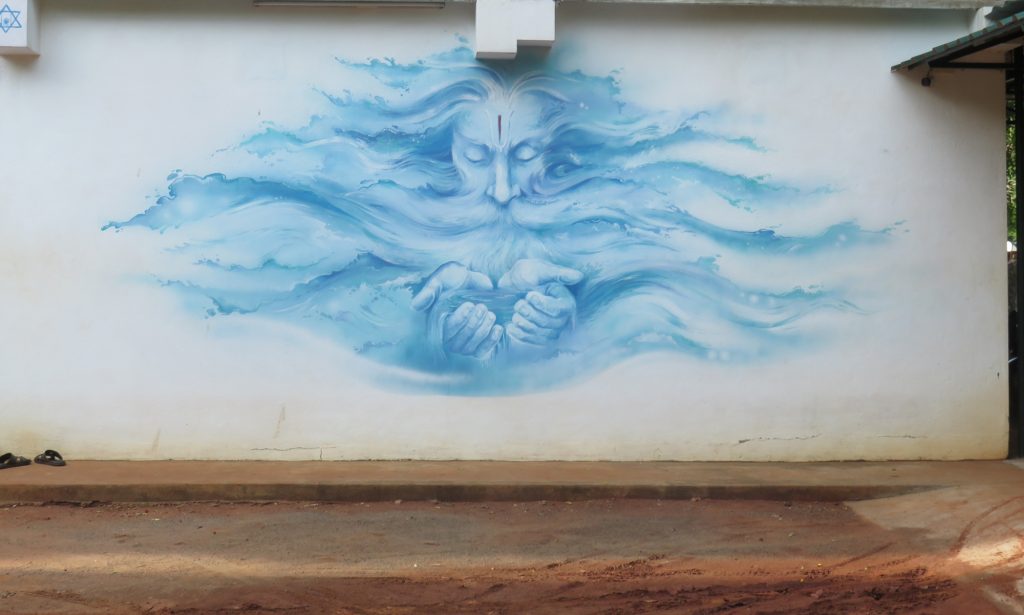 . Sri Aurobindo (who is kind of like a ‘prophet’ of this religion of non-religion) wrote on one of Auroville’s aims, which is human unity in diversity:“Instead of using external means we have to turn inward, because without a change in man’s nature no real change in the external circumstances is likely to take place. The only way we can move towards unity is to progressively realise that there is a secret Spirit, a divine Reality in which we are all one. The secret of unity is within. There is no unity, except, in the soul and by the soul”

My heart aches, because there are elements of truth to his words. But there is something missing.

I sensed this my whole time in the community.

The absence of…. insert the word , the thesaurus, the thing I can’t put my finger on.

Here: without Christ the hope, life and love I see has no depth into eternity. Despite the presence of spirituality, if there is absence of Christ’s body and blood, then there is no way for me to know God, to have relationship with him as Father, to live for him and for him to live in me, to give me the hope, life and love that created and sustains my being.
.
.

An unspoken golden rule in Auroville seems to be acceptance, but apparently the aim of “human unity in diversity” has conditions. This diversity is restricted when it comes to doctrinal belief. For as religion is dismissed on grounds of exclusivity, Auroville ironically exhibits the very dividing behaviour they attributed to set belief systems by failing to accept those who do subscribe to a religion. With religion excluded in the name of inclusion, those who align with one religion are subsequently alienated from the non-descriptive, ambiguous, diverging path to the Divine consciousness that is touted as objective truth here. While religion is acknowledged as a way to the Divine, this higher power and spiritual path strives for union with God through means of self. Here the Divine is like a force, an energy, where one embarks on a pilgrimage of self-improvement as a servitor of the Divine consciousness.  The influence of Eastern religion and philosophies is evident in the underlying presumption that there are no grounds for monotheistic belief.  There is the complete disregard of Abrahamic tradition, no acknowledgement of there being one God and only one path to the Divine. In establishing this framework, Auroville has created their own exclusive, divisive, narrow path – one that is open and diverges to many, leading astray, claiming to speak to the whole being, harmless in harnessing spiritual energy … all the while, sending people on their own paths of discovery with no guarantees, no certainty, no sure hope or foundation in a future, an eternal life, a relationship or access to God as Father. 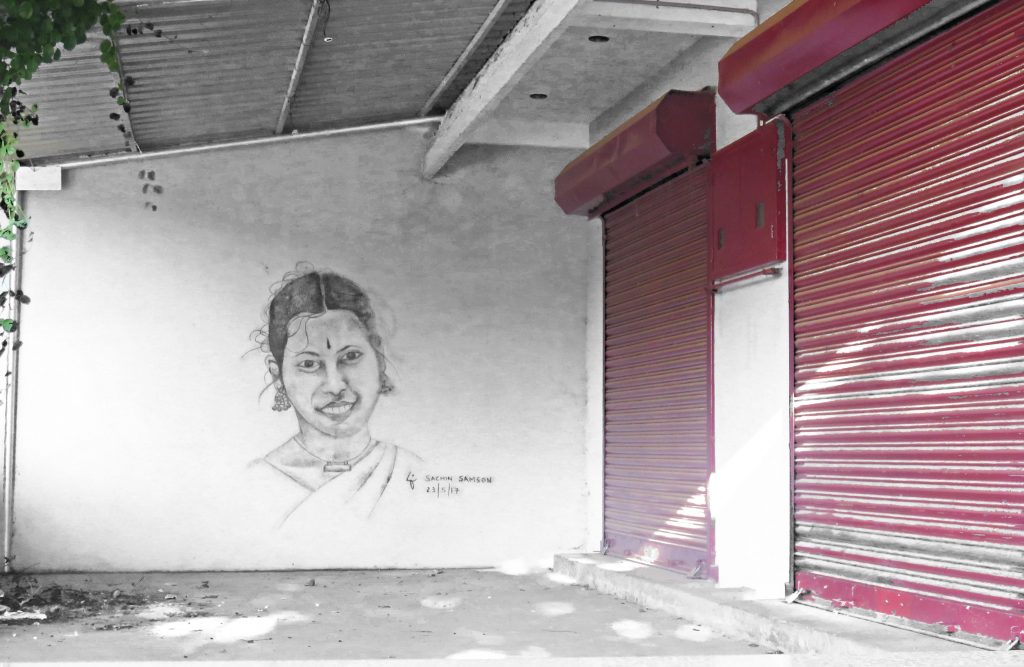 These words are coming from a dark place… I may be too cynical, too harsh, too critical… I don’t know. But all I know is that God is not just a Divine consciousness, some impersonal force. He is a relational, real and powerful God who is all-knowing and who has dominion, authority, glory and power to demolish the powers and principalities of this dark, evil world. The prince of this world is prowling around, looking for people to devour. And I feel like I have had flesh ripped left right and centre.
.
.
.

Here there are so many paradoxes. So many contradictions. A fullness of life and being, but disturbing emptiness in the futility of the pursuit, the Aurovillian dream. A certain substance is lacking in this structure. There is no foundation. No cornerstone. What if the unity this community strives for was in the context of the trinity? Then there would be something. A certain intimacy. Yes. True one-ness. One God. One Spirit. One Body. True unity. Communion with God himself! Yes, there is exclusivity. And there has to be. Otherwise God wouldn’t be God. He wouldn’t be Divine, he wouldn’t be the Sustainer and Creator. He wouldn’t be Saviour. If God isn’t one. If God is many. Then what does that say about his authority? his power? his sovereignty? God is ONE. And we can only come to him by the blood of Christ. There is only one way, one truth, one life. In Christ.
.
.
.

“Therefore, remember that formerly you who are Gentiles by birth and called “uncircumcised” by those who call themselves “the circumcision” (which is done in the body by human hands)— remember that at that time you were separate from Christ, excluded from citizenship in Israel and foreigners to the covenants of the promise, without hope and without God in the world. But now in Christ Jesus you who once were far away have been brought near by the blood of Christ.

For he himself is our peace, who has made the two groups one and has destroyed the barrier, the dividing wall of hostility, by setting aside in his flesh the law with its commands and regulations. His purpose was to create in himself one new humanity out of the two, thus making peace, and in one body to reconcile both of them to God through the cross, by which he put to death their hostility. He came and preached peace to you who were far away and peace to those who were near.  For through him we both have access to the Father by one Spirit.

Consequently, you are no longer foreigners and strangers, but fellow citizenswith God’s people and also members of his household,built on the foundation of the apostles and prophets, with Christ Jesus himself as the chief cornerstone. In him the whole building is joined together and rises to become a holy templein the Lord. And in him you too are being built together to become a dwelling in which God lives by his Spirit.” – Ephesians 2:11-22

.
.
.
Despite the deep-rooted convictions I hold, I did go to Auroville open-minded. Though the experience was turbulent, I found it did strengthen and solidify my belief, rather than make me doubt or question God’s sovereignty. My discernment was certainly sharpened. I am convinced that following Jesus is the only way, truth and life and any path that does not lead to the cross of Christ is one to be cautious of. He is the light that has come into this dark world. As my friend wrote to me on a post it note during the feedback reflection we had in class:

“Cults are bad. Good thing you’ve got your head screwed on.”

One thought on “can my imagination live in a utopia”